The Kulturpalast in Dresden as well as the Eberbach Monastery are impressive examples of creative and contemporary lighting solutions under heritage protection. The planning of these projects was carried out by Conceptlicht and was perfectly implemented for the most part by means of specific special luminaires from LMT.

Hilpoltstein, 1. August 2017 – As soon as architectural monuments are getting fundamentally renovated, this usually includes also the redesign of the interior and exterior lighting. During the implementation, the requirements of the monument protection authorities are certainly an additional challenge for the lighting planners. Helmut Angerer, Managing Director of Conceptlicht GmbH from Traunreut, accepts this regularly and with complete passion. „Prior to thinking about a lighting concept, I have a closer look into the meaning of the building“, says Angerer.
While the Kulturpalast Dresden, at about 50 years, is one of the very young listed buildings, the Eberbach Monastery went through a eventful history of several centuries. Both buildings were equipped with new luminaires as part of a general renovation. 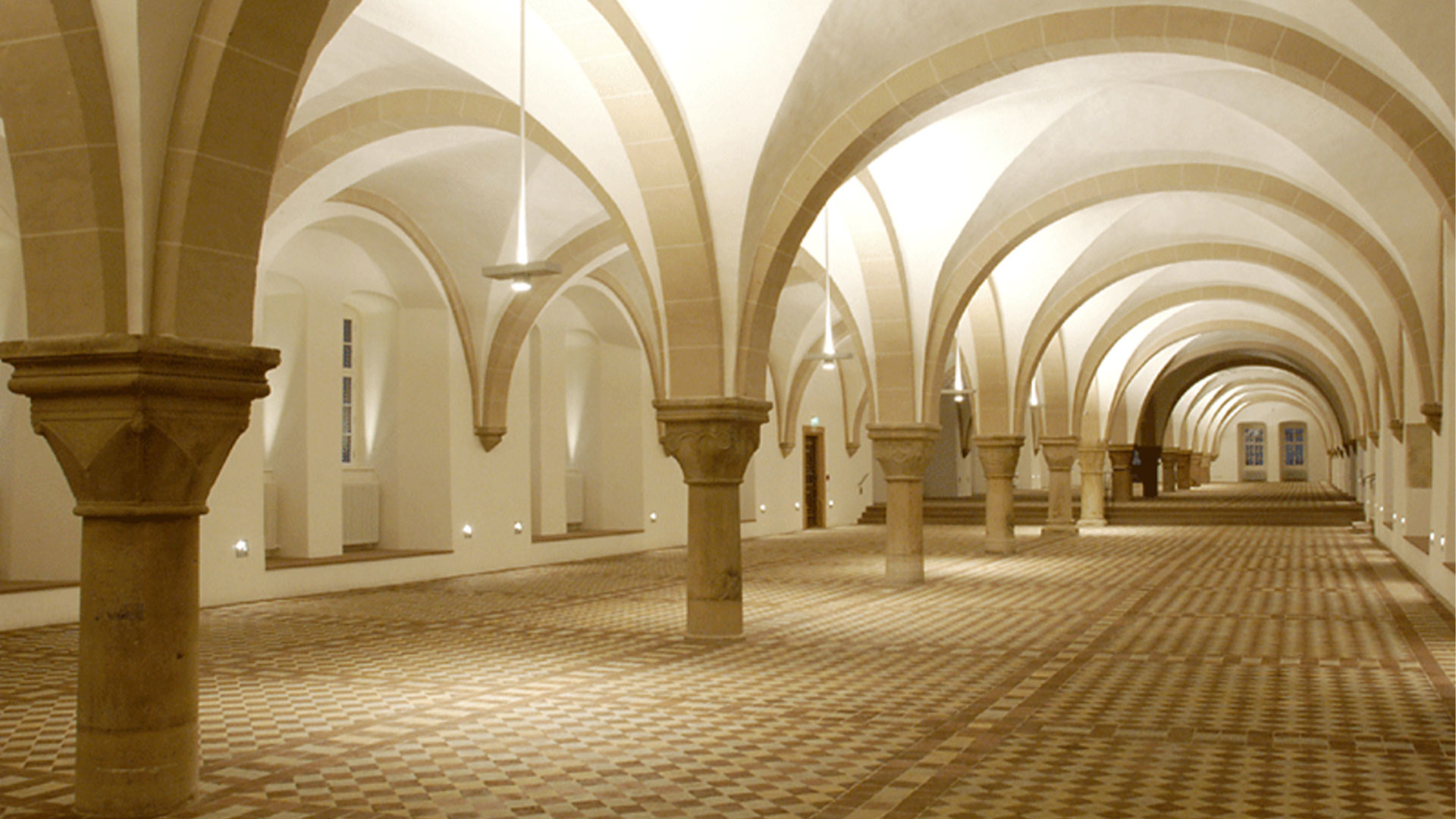 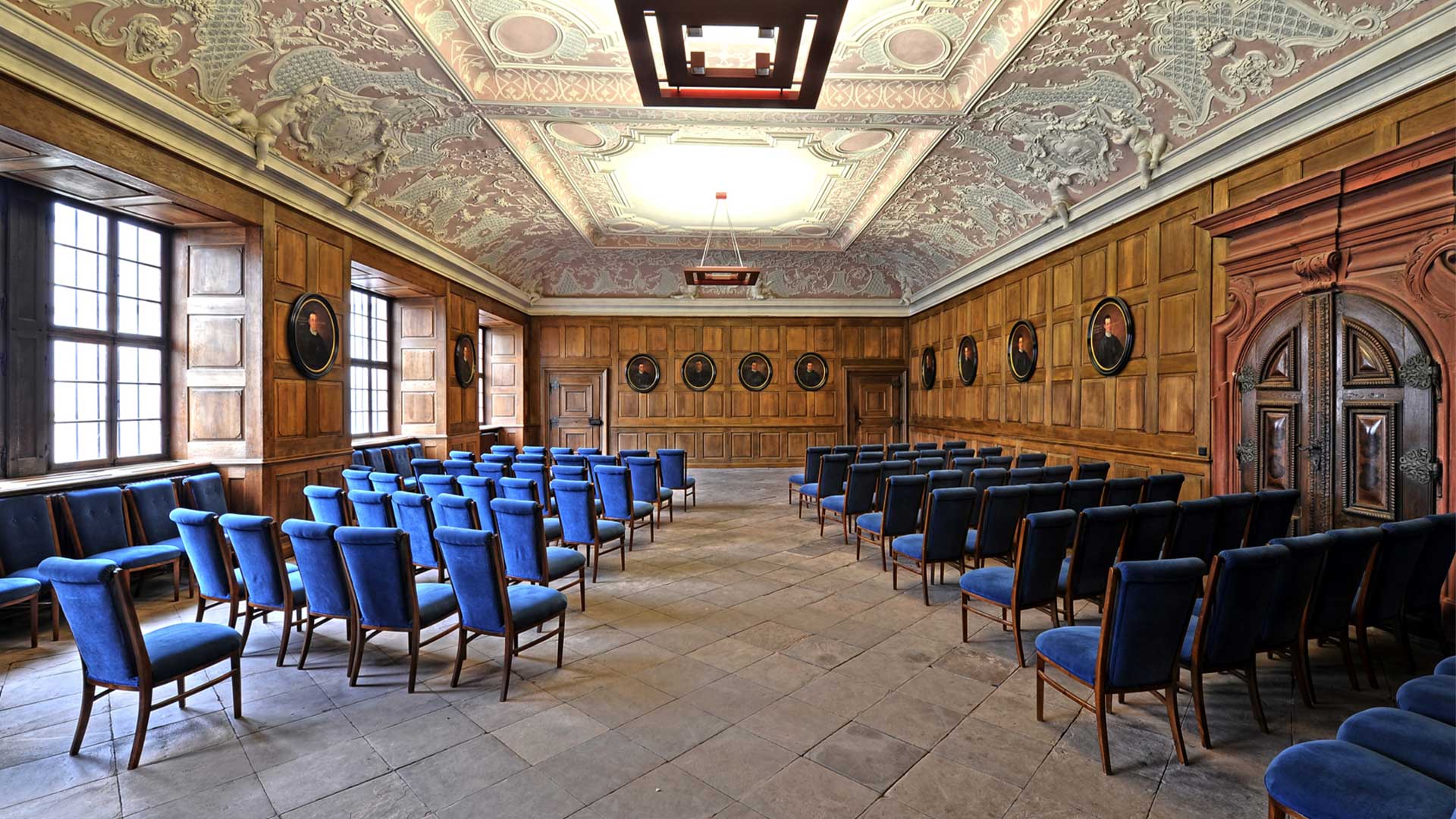 Since 1969, the Kulturpalast has been part of the cityscape of Dresden. Since 2008, it has been listed as a historical monument. In the course of a several-year refurbishment, the exterior and interior luminaires of the building were also renewed, and some existing luminaires were reworked. “The Kulturpalast is located in the middle of Dresdens inner city and is surrounded by supraregionally renowned landmarks. Therefore, in our view, the building has to integrate at nocturnal illumination into this picture, corresponding to its significance“, explains Helmut Angerer, who was with his team, responsible for the entire lighting design of the Kulturpalast. Seen from the Altmarkt place, the Frauenkirche is in inseparable visual connection with the Kulturpalast. Since the surrounding historical monuments are illuminated warm white, Angerer opted for a neutral white light color at the Kulturpalast. “As a result, the building seems more functionally and does not compete with the nearby monuments“, Angerer explains.
According to the requirements of the Monument Protection Authority, both the locations and the dimensions of the existing outdoor lighting should be maintained. “The recesses in the roof ledge are very close to the facade and the arcade area is about 5.7 metres high. Since we absolutely wanted to avoid lighting the facade or the columns in the arcade area, it was clear that this could only be possible by means of particularly developed luminaires. However, due to our detailed planning and with the support of LMT, who had to adapt many luminaires exactly to the existing recesses, this was perfectly achieved“, summarizes Angerer. In accordance to Conceptlicht’s design, LMT produced a total of more than 200 efficient LED luminaires for the roof ledge and arcades as well as 12 double spots with ball joints to accentuate the tension rods on the facade. Furthermore, LMT supplied 18 modified standard luminaires for illuminating the copper roof hood.

The outdoor luminaires for the roof ledges and arcades are basically three types in different variants. The luminaires are mainly square (approx. 40 x 40 cm), but some are also rectangular – depending on the existing ceiling recess. The modern LED luminaires with asymmetrical light emission have a light color of 3000 Kelvin and a luminous flux of 2500 to 3000 lumens. The transition to the existing ceiling is formed by magnetically held cover frames secured with stainless steel ropes, which not only provide an excellent look, but also facilitate maintenance. In addition, all luminaires were equipped with switching modules for emergency lighting.
In order to highlight an architectural detail of the Kulturpalast and thus also to emphasize vertical components of the building, special spots have been developed for the tension rods on the facade. The narrow-beam LED double spots are attached to the roof ledge between the twin rods. The light beam of each spot with 4000 Kelvin and 840 lumens can be precisely aligned by a ball joint. These spots are the only outdoor luminaires that did not exist before the refurbishment. “Of course, we had to coordinate with the heritage protection authority in advance, but that was not a problem, as the spots are discreetly mounted and simply highlight a beautiful and already existing element of the building at night. No doubt that this detail is worth to be visible“, says Angerer.
Another characteristic of the Kulturpalast is the extraordinary copper roof structure. Here, the drawing loft with a lot of technology is located and a kind of “acoustic hood” shields the concert hall below from foreign noises. From the outside, the copper cladding is illuminated with 18 modified standard luminaires by LMT.

The discreet lighting design of the outdoor area, together with the large glass facade, which allows unobstructed views of the interior and thus gives the interior lighting an external effect, gives the interior lighting a modern, open and harmonious overall picture. “In my opinion, the density of light in the inner cities is unnecessarily high. Instead of developing luminaires that really only illuminate the surfaces that are actually to be illuminated, it is popular to use luminaires which emit their light wildly in all directions. However, I must also say that there are only a few manufacturers who develop special luminaires with us, produce high-quality luminaires and then deliver them on time. With LMT, we have had a lighting specialist at our side for years who masters his craft in all disciplines“, explains Angerer.
For the premises of the Herkuleskeule cabaret, various library and foyer areas as well as hall entrances and vestibules, LMT also supplied various LED luminaires, some of which were specially developed – especially for the completely newly built concert hall, although the latter was not one of the listed building areas. 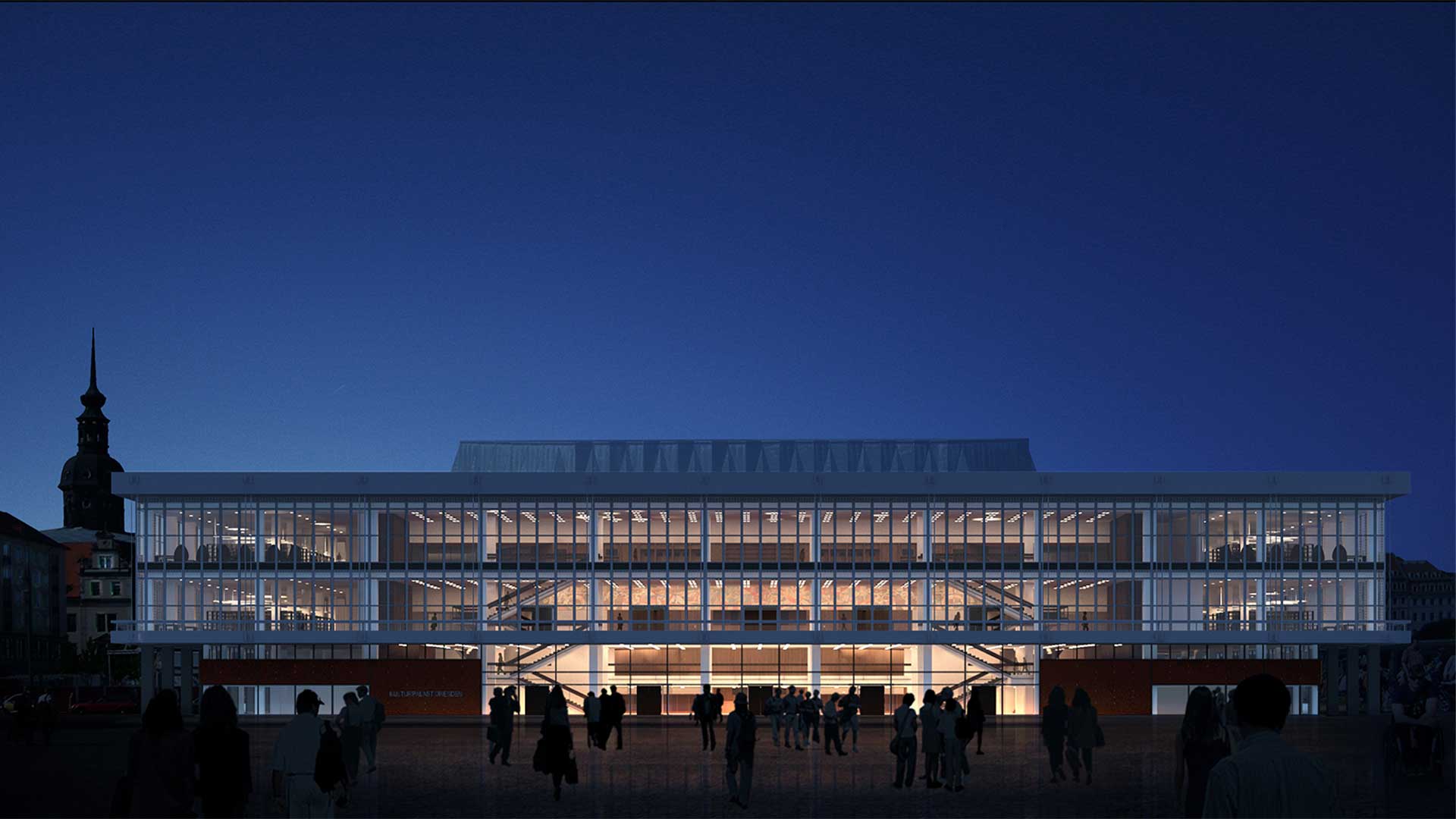 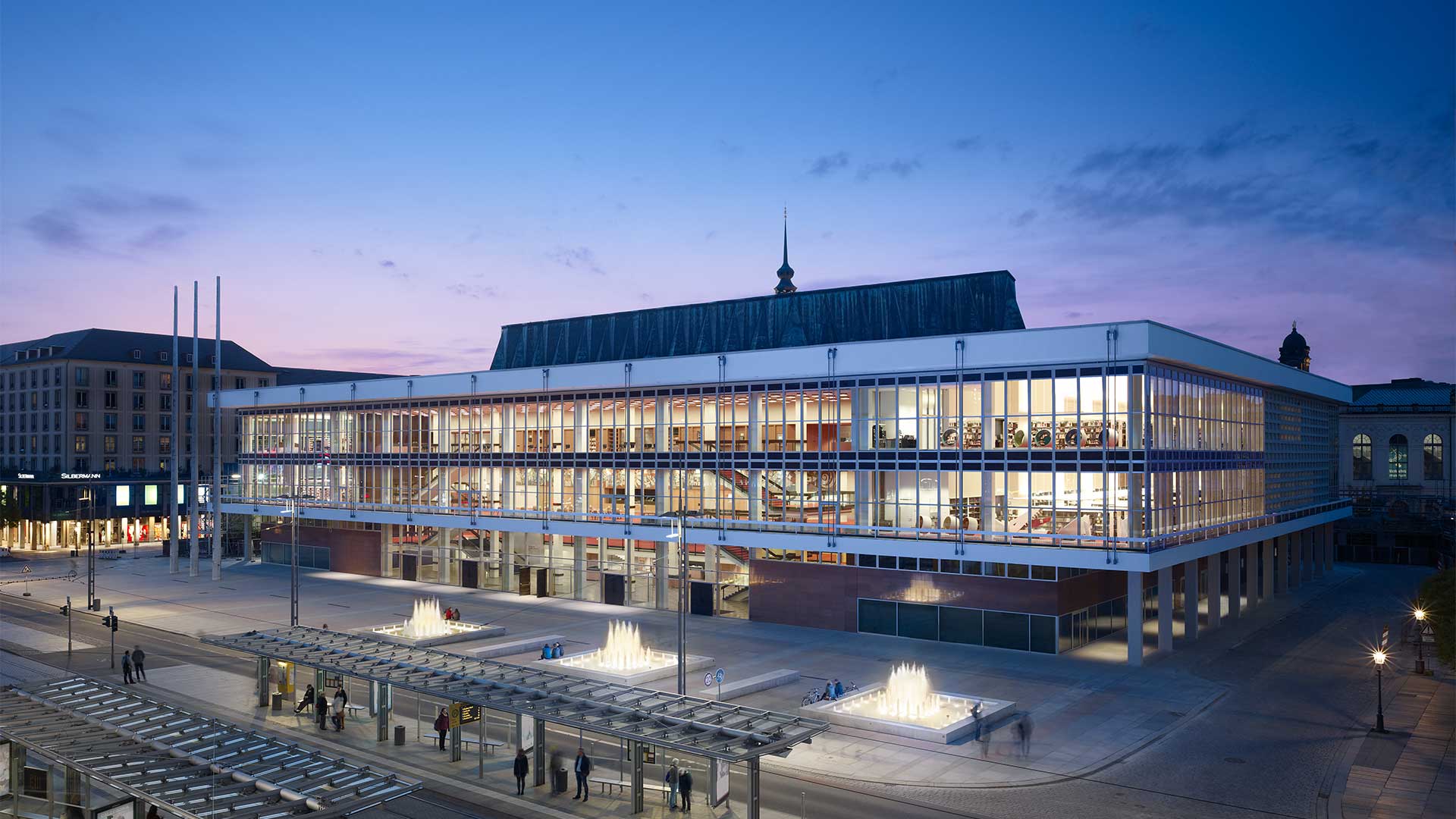 The history of the Eberbach monastery dates back to the 12th century. The monastery, which is one of the few cistercian abbeys almost completely preserved, gained worldwide fame as the filming location for the interior shots for the film “The Name of the Rose” based on the novel by Umberto Eco. In 1986, the general renovation of the monastery started. The preserving of the historic structure comprises all buildings and is still ongoing. The work in the listed premises of the Laiendormitorium and the Monk’s Refectory has already been completed. Conceptlicht had been commissioned with the lighting design of these rooms and developed together with LMT various luminaires that meet both the modern use and the historical significance of the premises.

The monks refectory used to serve as a dining room for the monks and is now used by the hotelier for events and celebrations. Regarding the lighting design, the effect intended by Angerer was determined by the richly decorated stucco ceiling. In order to achieve a homogeneous illumination of the rectangular space, he and his team planned two 120 x 120 cm chandeliers, which hold four components for direct and indirect lighting: ceiling field illumination, cove light, table light and plaster light. The central ceiling fields, which are offset upwards, are illuminated with 4 halogen lamps of 65 watts/12 volts each. “Since the luminaires are not arranged in the centre of the ceiling fields, but are distributed all over the chandelier, a subdivision into four fixtures subtypes was necessary here, so that the light-shadow edges are coincident with the ceiling edges. Otherwise, there would have been a slight outshine at the edges”, explains Angerer. Also the large-area ceiling cornices which are formed as a voute, are illuminated with 15 halogen spotlights of 65 watts/12 volts, which are flush mounted into the vertical surfaces of the chandeliers.
In order not to generate the room illumination merely with the help of the ceiling surfaces, the chandeliers offer a third component: the table lights with each 4 halogen lamps of 65 watts, shine directly downwards and generate a brilliant light of the required intensity. Finally, there is a plaster light in the chandeliers (4 T5 lamps of 39 watts). The mixture of indirect and direct light creates an ideal balance. For usage-related lighting scenes, all components can be switched and dimmed separately. The chandeliers were made of aluminium and were given a wine-red coating that perfectly harmonizes with the wood-panelled walls as well as the pastel-coloured stucco ceiling – a noble eye-catcher, even better with illumination.

The Laiendormitorium, formerly the dormitory of the lay brothers, is nowadays used for various large-scale events with up to 1000 people and is situated in the 81 metres long Lay Brothers’ Building from the early 13th century. The hall itself has an area of 1000 square meters and impresses with 13 twin yokes with groined vaults, which rest on 12 columns. In the middle between these columns are placed pendant lights, which allow different light scenes.
Prior to the technical development of the luminaires, Conceptlicht prepared some design drafts as well as a cardboard model as a basis for decision-making for the client. After the form was released, detailed planning was carried out. For basic lighting, LMT designed and manufactured 13 pendant luminaires with three light components: direct halogen light (300 watts), indirect halogen light (2 x 100 watts) and safety lighting (2 x 11 watts TCL). To accentuate the window niches LMT developed a luminaire for lighting the reveals, which is flush-mounted into the window sills. These 45 luminaires are each equipped with 2 compact fluorescent lamps of 11 watts and have a trough-shaped reflector with asymmetrical light emission. The cover is made of clear glass with a white printed edge.
“Because of the room proportions, we have planned a special dimming status, which can be set on a tableau. With this set-up, a brightness curve is created in the longitudinal axis of the hall, which swells from the entrance to the hall towards the end of the room. This literally drags you into the room when you enter”, Angerer explains the effect of his lighting concept.
Since 1998, the monastery has been owned by a charitable foundation whose overall goal is the sustainable protection and use of the monastery. Today you can visit and experience the impressive and completely listed buildings as part of various offers, as well as organise conferences and celebrations in them.

LMT Leuchten + Metall Technik GmbH specializes in the development and manufacturing of tailor-made solutions for lighting and metal projects. The portfolio comprises lighting tubes and luminaires for train stations, products for industrial lighting, various lighting solutions for architecture as well as housing and metal parts for medical technology, machine construction, interior works and art objects.
With its LED luminaire families YECTO, LYSO, SCOPE amongst others, LMT offers ideally suited products for energy efficient external and internal illumination of public and commercial buildings, retail shops as well as residential objects.
Since its foundation in the year 1984, the company worked together with many renowned clients, architects and lighting planners and implemented countless national and international projects, including numerous train stations, as well as lighting projects such as the Museum Island in Berlin, the Airport in Frankfurt and the Kulturpalast in Dresden.
Further Information on www.lmtgmbh.de

All designations, brand names and trademarks used in the text are the property of the corresponding manufacturer. Subject to error and modifications.