The Kulturpalast is located in the Heart of Dresden and was classified as a national monument in 2008. Starting from 2013, the building was fundamentally refurbished and restored for a total budget of 88 million Euros. LMT Leuchten + Metall Technik GmbH implemented the illumination concept for basic and accent lighting of the landmarked building – various sectors have been equipped with modern and partly specially developed LED lumninaires: exterior lighting fixtures for the illumination of the roof, the facade and the arcades, interior luminaires for the audience and tiered seatings as well as the stage and the organ area inside the concert hall, furthermore for the premises of the cabaret theatre “Herkuleskeule”, for diverse library areas, as well as for the foyer, the hall entrances and vestibules.

Helmut Angerer, CEO of CONCEPTLICHT GmbH from Traunreut and in authority for the complete lighting design of the Kulturpalast.

Mr Angerer, thank you for this interview. How do you tackle such a big project as the Kulturpalast?

HA: Prior to thinking about a lighting concept, I have a closer look into the meaning of the building. The Kulturpalast is located in the middle of Dresdens inner city and is surrounded by supraregionally renowned landmarks. Therefore, in our view, the building has to integrate at nocturnal illumination into this picture, corresponding to its significance.

A project like this certainly presents one or the other challenge, right?

HA: That’s correct. The recesses in the roof soffit were situated very close to the facade, and the arcade has a height of approximately 5.70 meters. To avoid unintended lighting of the facade or the arcade columns, it was clear that this was only possible with luminaires which were particularly developed for this building. We perfectly succeeded due to our detailled planning and the support of LMT, who had to match many luminaires exactly to the existing recesses.

Also the adaptation of the lighting to the external conditions was challenging. You have to imagine, that the surrounding historic monuments are all illuminated in a warm white light, such as the Frauenkirche: seen from the Altmarkt place, it is in inseparable visual connection with the Kulturpalast.   Due to this fact, we decided to use a neutral white light colour for the Kulturpalast. Therefore, the building appears more functionally and doesn’t compete with the monuments nearby.

Additionally, LMT had to develop special spotlights for the tension cables at the facade, to underline the vertical components of the building as well. These spotlights are the only external luminaires, which didn’t exist before the refurbishment. For this reason, we had to closely coordinate with the monument protection authority. Yet, this was not a problem because the spotlights are mounted unobtrusively, and emphasise at night a beautiful existing element of the building. No doubt that this detail is worth to be visible.

You have deliberately opted for a discreet lighting design. What were the reasons?

HA: In my opinion, the light density in city centers is unnecessarily high. Instead of developing lighting fixtures that illuminate merely the intended surfaces, it is popular to use luminaires which emit their light wildly in all directions. For this reason, we opted for a different way in lighting design.

Yet, I must say that there are only a few manufacturers, who plan special luminaires together with us, produce them to a high standard and deliver them also on time. With LMT we have a lighting specialist at our side, that masters all disciplines of its business. 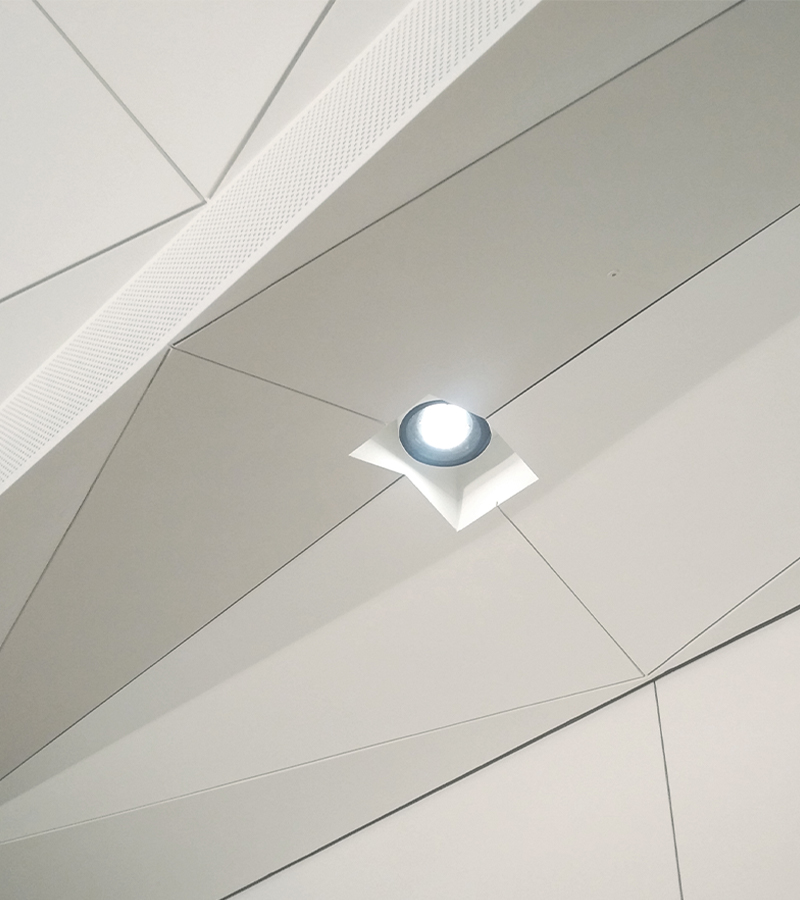 Exterior luminares
Basing on the plans of Conceptlicht, LMT manufactured efficient LED luminaires for roof soffits and arcades:
This comprises three types in different variants. Most of the luminaires are quadratic (approximately 40×40 cm), some also rectangular – according to the existing recesses. The fixtures have an asymmetrical light distribution and a luminous flux of 2500 to 3000 lumen with a light colour of 3000 Kelvin. Cover frames with magnetic holders and safety ropes made of stainless steel form the connection to the existing ceiling. They facilitate the maintenance and additionally provide for a pristine ceiling appearance due to their matching colour. All luminaires have been equipped with security switches for emergency lighting.

To emphasize an architectural detail of the Kulturpalast and also to accentuate the vertical component of the building, LMT developed special twin spotlights with ball joints for the illumination of the facade tension cables. These narrow beam LED twin spots were installed at the roof soffit in the interstice between each pair of tension cables. The light of the spots has a colour of 4000 Kelvin and a flux of 840 lumen and is exactly adjustable due to the ball joint.

Another characteristic of the Kulturpalast is the extraordinary copper roof cap. It is the housing of the drawing loft with all its necessary equipment, a kind of „acoustic capsule“ protects the concert hall from extraneous noise. The copper cap is illuminated with 18 modified standard exterior luminaires.

Interior luminaires
LMT delivered as well various and partly specially developed LED luminaires for the premises of the cabaret theatre „Herkuleskeule“, for different areas of the library and the foyer as well as for the accesses to the auditorium and for the glassed entrances – and in particular for the re-edified concert hall: downlights and uplights for the audience and tiered seatings, stage and organ area, as well as lighting fixtures for ceiling, steps and coves. Furthermore, several existing luminaires have been refurbished by LMT.