The football stadium of the first division club FC Krasnodar was inaugurated in 2016 after a three-year construction period. In the meantime, the surrounding park area has also been completed and invites visitors to stroll and linger with various areas such as the amphitheatre, viewing platform, terrace garden, playground and skate park. Also at night the park is very popular with walkers, cyclists and skaters.

The lighting concept for the stadium (without floodlights and roof lighting) and the park came from Conceptlicht, according to whose specifications LMT Leuchten + Metall Technik GmbH from Hilpoltstein supplied luminaires, including many special luminaires that were developed and produced especially for the project.

Michael Feyerlein, design engineer at LMT GmbH in Hilpolstein and responsible for the implementation of the “Krasnodar Stadium Park” project, answered our questions.

MF: LMT had the order for various outdoor luminaires for the new football stadium in Krasnodar. In detail these were lighting for the facade and for some areas at the entrances, as well as various parts of the stadium park. On the one hand, the specifications of the lighting designers and architects had to be constructively implemented, and on the other hand, the production and on-time delivery of the luminaires in Hilpoltstein had to be planned, controlled and implemented.

Which products were in use?

Can you give us a few additional figures?

BH: For example, the seat light adds up to about 440 running meters. About 150 pieces of so-called “light mushrooms” were produced to illuminate the pavements.

How did the implementation of the project go?

MF: We implemented the majority of the lights ourselves. However, there were a few lights which, due to time constraints, were not manufactured by us at the time, but by other companies with whom we had already had good experience.

During the peak phase of the project, an entire design team worked on the project. Such phases in particular are very intensive. Everyone works at full speed to implement the various specifications and in the end all the individual components have to fit together. But I think our well-rehearsed team has once again done a very good job. The result is at least more than respectable.

How important are the right partners in such a project?

MF: Very important! Of course you always have to stand up to the competition. I think that in the end it was clearly the overall package that was decisive for the cooperation with LMT. As with every project, the decisive factor here was good cooperation with the architects and lighting designers involved, which naturally presupposes mutual understanding and appreciation. Then a trusting working atmosphere can also develop in a short time. Our extensive experience in dealing with projects of this kind had certainly led to us being involved in this great project.

What special challenges were there before or during the project?

MF: The bollard luminaire, for example, was relatively challenging. It was a light tube made of satinised plastic with uniform illumination all around, which was to be homogeneously illuminated with only one light source. Thanks to a special reflector technology, we were able to achieve a very uniform illumination quality, which also achieves better light diffusion. Thanks to our extensive experience, we were able to weigh different approaches against each other and finally master this challenge.

Also the statics of the bollard luminaire could not be neglected. In view of the fact that fans at football matches could also let their emotions out on objects in their surroundings, e.g. by climbing up luminaires, we naturally had to ensure that no safety-relevant aspects were overlooked.

Approximately how long does it take to develop a product, such as the bollard luminaire, especially for this purpose?

MO: That always varies, in this case relatively long, because – as I just mentioned – the design and development of the lighting technology was very complex. In some cases, we are talking about several weeks until the final result meets all requirements and is accepted by the client.

What attracts you to such projects?

MF: It is always exciting. Especially when you see the lighting design concept at the beginning – in this case from Conceptlicht. Of course, it is always a challenge in the beginning until the first ideas mature, how everything can be turned into reality. Many things are so extraordinary that you don’t have them on your table every day. In the end, of course, you benefit from the new experiences and impressions that you can then apply to new projects. 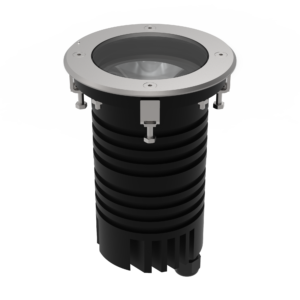