The facade illumination of the football stadium in Russia emphasises the monumental impression of the building; in the surrounding park the lighting concept follows the motto „light, not radiance“ – realised with various luminaires by LMT.

Hilpoltstein, 27. June 2018 – The football stadium of the premier league team FC Krasnodar was inaugurated in 2016 after three years of construction. Recently, also the surrounding park area was completed and invites people to go there for a walk or to linger in the different areas, as there are an amphitheatre, a viewing platform, a terraced garden, a playground and a skate park.  Also at night time the park is very popular for promenading, biking or skating. During the football world cup 2018 in Russia, the Spanish team took up quarters in the south Russian City and used the modern training facilities of FC Krasnodar.

The light concept for the stadium (except floodlight and roof illumination) and the park was created by Conceptlicht. According to their specifications, LMT Leuchten + Metall Technik from Hilpoltstein, Germany, delivered the luminaires – amongst them many special lighting fixtures, which were particularly developed and produced for this project. „Our concept was based on the intention to let the stadium structure appear as a significant, but not as the dominating part of the park scenery. So it was a conscious decision not to illuminate the stadium from outside,“ explains Helmut Angerer, CEO of Conceptlicht GmbH. 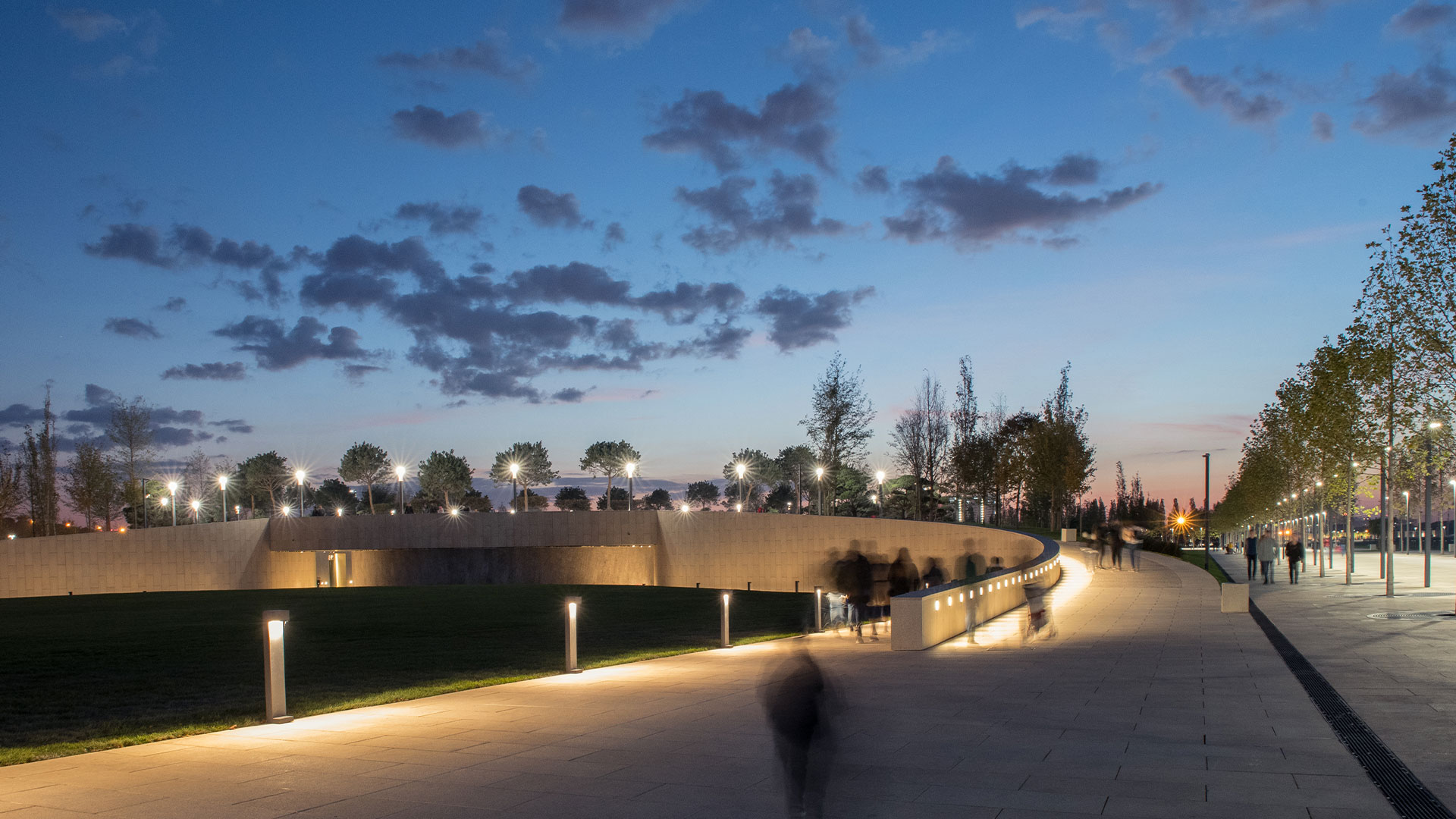 The football stadium Krasnodar is surrounded by the sprawling and future-oriented Galizki Park. There are winding paths and spaces along spirally arranged theme areas, interspersed with green lawns, tree avenues and rivulets, passing the viewing platform, the amphitheatre, the terraced garden, the playground and the skate park. At night, the complete park landscape is illuminated by unobtrusively in the setting integrated luminaires, which let the trees, walls, benches, rivulets, stairs and paths light up. „In the landscape park, we have taken every opportunity for a concealed installation of the luminaires in order to cause an indirect lighting effect. This puts the park in the foreground and not the lights. Using mast luminaires, it would have been easier and cheaper, though more banal. But also we were not able to do without mast luminaires. In these cases we made sure, that the illuminated surfaces give a clear picture and do not appear to be illuminated at random,“ points Angerer out.

Also for the park grounds LMT provided a large number of various lighting fixtures – only for the tree illumination more than 500 uplights YECTO 1.R in the tree grates, almost 440 asymmetrical underfit luminaires SLOPE.o for a protracted park bench, over 200 light columns in different lengths for the market place ring, hundreds of bollard luminaires for glare-free strolling, path lights, wallwashers and step lights as well as many other special luminaires, most of them particularly designed and produced for this project.  „We were relieved when we noticed that LMT was awarded the contract for the delivery of these luminaires, because then a largely smooth execution was expectable and we were able to focus on the lighting details to reach the public with the intended effects,“ rejoices Angerer.

The stadium was built as a pure football stadium for 33,000 spectators, according to UEFA guidelines, and is situated in the north-east of the city of Krasnodar. The 42 metres high Building stands on a pedestal above the surrounding sports park and the flanking football academy. While the outside appearance of the elliptical building reminds of the Colosseum in Rome, the visitor is welcomed in the arena by state-of-the-art equipment and technology.

Worldwide unique is the high-resolution video screen above the top tier, which once stretches around the entire stadium. The travertine-covered façade of the monumental stadium building, which is structured in three horizontal levels by fluted pilasters, shines almost white in daylight. This impression is retained even with nocturnal lighting, as the luminaires optically remain in the background. Yet, a multitude of cornice luminaires, up- and downlights as well as arcade luminaires literally let the building light up from the inside. “To define the perceptibility of the building structure at night, merely the top edge of the stadium was equipped with a circumferential concealed light strip. Due to the illumination from inside the volume remains discretely discernible. We have also taken care that no highlights lead to unintended significance and that not already from 50 metres away, the light patters on the visitors. The resulting light emission geometry could only be accomplished with special lighting fixtures,“ sums Angerer up.

For the football stadium, LMT supplied numerous minimal downlights and uplights with special attachments for the illumination of the pilasters and their interspaces with ten-meter-high, string-like stretched steel lamellas, as well as lighting fixtures for the ticket booths and the arcades, light masts for the forecourt and luminaires for the VIP parking garage.

LMT Leuchten + Metall Technik GmbH specializes in the development and manufacturing of tailor-made solutions for lighting and metal projects. The portfolio comprises lighting tubes and luminaires for train stations, products for industrial lighting, various lighting solutions for architecture as well as housing and metal parts for medical technology, machine construction, interior works and art objects.
With its LED luminaire families YECTO, LYSO, SCOPE amongst others, LMT offers ideally suited products for energy efficient external and internal illumination of public and commercial buildings, retail shops as well as residential objects.
Since its foundation in the year 1984, the company worked together with many renowned clients, architects and lighting planners and implemented countless national and international projects, including numerous train stations, as well as lighting projects such as the Museum Island in Berlin, the Airport in Frankfurt and the Kulturpalast in Dresden.
Further Information on www.lmtgmbh.de

All designations, brand names and trademarks used in the text are the property of the corresponding manufacturer. Subject to error and modifications.